BIRDS organized a three-day workshop, StringMasters A Coruña 2016, to officially launch the project. It included several scientific activities and also management sessions that allow the partners make agreements for the best development of the project.

StringMasters is an annual forum (or a series of forums) on stringology, which was established with the aim of bringing together researchers in string algorithms at all levels (senior, junior, especially graduate students) to study current problems of particular theoretical and practical interest. It is informal, with no scheduled presentations, entirely devoted to new research resulting from the interactions among the participants.

StringMasters A Coruña 2016 was organized with the same idea and format as previous events of the StringMasters series. In these events, typically small impromtu groups form, of about 2 to 5 researchers, who share a common interest in a problem. Old collaborations are reinforced, and new collaborations are formed. The workshop is accommodated in several meeting rooms to allow space for the parallel working groups and for general milling around.
Both the administrative and research staff of UDC have been involved for the organization and management of the meeting. In addition, Travis Gagie (University of Helsinki, UH) was also in charge of the organization of StringMasters A Coruña 2016. CITIC also collaborated in the organization and funding of the event.
The invitation for participating in StringMasters A Coruña 2016 was open to all interested researchers.

A total of 20 participants (5 women and 15 men) from 8 countries attended the event. In addition, 6 postgraduate students from UDC helped in the organization. They attended some of the events of StringMasters, which allows them to interact with experienced researchers in their field. It is notorious that the attendance to StringMasters A Coruña 2016 was higher than previous editions of StringMasters meetings.

Working groups discussed goals and projected results of the various work packages. This allowed the transfer of knowledge among the participants and the discussion of new problems, ideas and approaches in the context of the project. We expect that this promoted advances in the field, and will generate several publications as conference papers and journal articles.

In addition, there was plenty of networking time for the consortium members, and also with the external members attending StringMasters A Coruña 2016, during coffee breaks, lunches and the social dinner. This strengthened the collaboration among the participants, opened new secondment opportunities, and also generated new ideas to organize summer schools and future workshops. 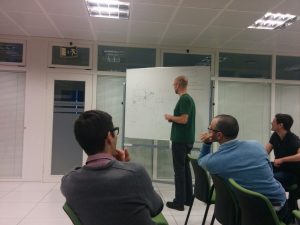